During the general assembly of AICESIS in Rumania

SER Curaçao re-elected as member of the board to international association of social and economic advisory board.

Bucharest, 11 October 2019 – The Social and Economic Council of Curaçao was re-elected as member of the AICESIS Board for the period 2019-2020, during the 18th General Assembly of the International Association of Social and Economic Advisory board and Similar Institutions, AICESIS, which was held in the Rumanian capital Bucharest on the 9th and 10th of October and which was revolved around the celebration of the twentieth anniversary of existence of the association. Furthermore, the SER maintained its position as Deputy Secretary General of the AICESIS for the Latin American and the Caribbean region for the same period. On behalf of the SER the acting chairman John Jacobs, secretary general Raul Henriquez and senior-advisor Miloushka Sboui-Racamy were present.

The Latin American and the Caribbean region were furthermore represented by delegation members from the Dominican Republic, Guatemala, Aruba and Sint Maarten.

The General Assembly in Bucharest, at which participated more than fifty countries and which also counted with the presence of observers from among others the International Labor Organization (ILO) and the Economic and Social Council of the United Nations (ECOSOC) and which revolved around the transition of the European presidency of AICESIS to Africa. The statutes of AICESIS stipulate that the presidency which has duration of two years must alternate among different continents.  For the period 2019-2021 West-African Ivory Coast has the honour. A new AICESIS Board was also elected and their new deputy secretary-generals were appointed for each continent.

In his farewell speech the AICESIS’s chairman, the Rumanian Iacob Baciu, pointed out how important the continuation of the activities within the AICESIS are, which has already proven it’s valued as a recognized international body in which national social-economic advisory bodies and similar institutions sustain social dialogue based on equality and equivalence about current global social-economic issues and exchange best practices with each other. For a compilation of all activities during the Rumanian chairmanship Click here.

Baciu further emphasized in his farewell speech that during his chairmanship the discussions within AICESIS connection were mainly centered on the theme digitization and the consequences of this for humanity, which was the theme he chose in 2017 for his two-year mandate period as AICESIS’s chairman. At the beginning of March, that theme was approached from different angels during the annual board meeting of AICESIS, which took place in Willemstad, Curaçao, and which was followed by an international workshop during which also best practices were exchanged. At the AICESIS board meeting and the international workshop, where the SER of Curaçao acted as host, almost all continents were represented. For the final report about this theme click here.

Now that Ivory Coast has assumed the chairmanship of AICESIS the accent for the next two- year term will be on closing the gap between the continents in the social-economic field resulting from global trends such as accelerated globalization, technological developments, climate change and demographic factors.

In his inaugural speech the new chairman Charles Koffi Diby from Ivory Coast pointed out the need for concrete global actions and efforts to minimize the big digital inequality between rich and poor countries. Herewith they respond to the sustainable development goals (SDGs) of the United Nations (UN) and to the Centenary declaration of the ILO about a human-centered approach for the future of work. He further explained that part of the new AICESIS strategy under his chairmanship will be reinforcing the existing relationships with relevant UN-bodies like the ILO and ECOSOC and to start strategic ties with other relevant multilateral organization, such as the Organisation for Economic Cooperation and Development (OESO) and the UN- Environment program (UNEP). He also encouraged the participants to work together as much as possible at regional level on common topics and to organize thematic regional meetings.

Finally, Diby made an appeal to keep fostering social dialogue, inclusiveness and democratic participation and to use the knowledge and experience of AICESIS effectively in that connection, since AICESIS is the leading global knowledge- and social dialogue platform, from which institutionalized tripartite dialogue platforms from employers, employees and governments could learn wise lessons.
For the decisions of the board meeting and the General Assembly click here.

After the General Assembly an International Conference took place with the theme “The governance of the digital economy: the critical role of social dialogue through ESCSIS”. It was a joint conference of the International Labor Organization (ILO), with AICESIS and the Social Economic Council of Rumania. This event took place from 10-11 October 2019. For the program, background paper and the main presentations of the ILO Click here. 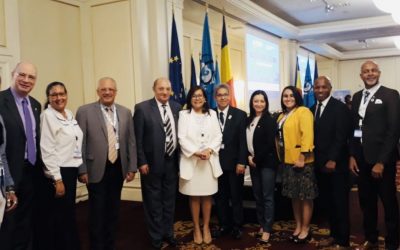