CURACAO LOOKS INTO THE THEME FUTURE OF WORK

CURACAO LOOKS INTO THE THEME FUTURE OF WORK

Many viewpoints at the mini-conference about Future of Work

Willemstad, 12  May 2019 – On Saturday 11 May, during the mini-conference about Future of Work, which was held at the World Trade Center (WTC) and attended by more than a hundred persons, mainly professionals, from various sections of the community, there were many discussions on the threats and opportunities on the changing labor market of Curaçao. The mini-conference was organized by the Social – Economic Council (SER) and the Ministry of Social Development, Labor and Social Welfare (SAOW) for the upcoming centenary celebration of the International Labor Organization, the ILO next month. The mini-conference was transmitted live by radio station CuromZ86. The Television broadcaster Nos Pais Televishon was also present and filmed the whole conference. In a later stage, Nos Pais Television will transmit the complete conference.

The mini-conference was introduced by the chairman of the day Raul Henriquez (Director and Secretary-General of the SER) who presented a video message of Minister Hensley Koeiman of SOAW. In his video speech Koeiman encouraged the participants, in spite of the great challenges which Curaçao is confronting with at this moment, to maintain the discussion on the theme lively and to focus on the available opportunities. As concrete examples he mentioned among other things the arrival of Damen Shiprepair Curaçao, which will create employment for the people of Curaçao and the arrival of the company Corendon, which is constructing a mega hotel on the island and will provide sufficient employment opportunities now that the touristic sector is growing. Considering the theme of the conference, he also talked about the promotion of strategic goals such as more jobs, better social protection, social dialogue and respect for the basic labor standards (‘decent work”).

After the introductory remarks of Minister Koeiman, the SER-director Henriquez talked about how the project ‘Future of Work’ will be addressed in Curaçao and the role of the SER in this regard, laying a link between the importance of social dialogue and the ‘drivers of change’ in the complex world of labor.
Technological developments, demographic trends, climate change and an accelerated globalization are already noticeable in our country, as Henriquez emphasized. In various economic sectors jobs are disappearing as a consequence of automation, digitization and robotizing. Our social security system is under severe pressure due to increase of an ageing population and new comers’. On the 9th and 10th of May, the SER’s of Aruba, Curaçao and Sint Maarten organized a very well attended symposium on migration policy, which demands a solid policy and effective intervention to counteract the mismatch on the labor market and to guarantee our social security system. Furthermore, Henriquez talked about the rising of the sea level which is already noticeable on some parts of the island and which requires the necessary attention.

‘The social dialogue, with a broad possible social participation about these trends and developments should be stimulated. Over the past years, social dialogue and tripartitism made a substantial contribution to the realization of social justice and peace in the world. The idea is that now more than ever it is necessary to offer adequate solutions for the challenges that is transforming the ‘world of work’ according to Henriquez.

After this, Miguel Goede, author and scientist, presented his conclusions and findings of a quantitative and qualitative study, conducted by him on behalf of the SER and the ministry of SOAW, on the trends in Curaçao which are related to the theme Future of Work in general and to the Fourth Industrial Revolution in particular. The research of Goede focused on the question what is going on in this area in the various sectors such as the government, the business community, the ngo’s, education, unions and the academic world and how the dialogues are conducted in these circles. For the report of this research click here

The main conclusions from the research is that within all these bodies there is indeed complete attention for the theme and that there are also sound discussions and debates being conducted. However, the dialogue is too fragmented at this moment and limited to certain aspects of Future of work. A structured, integral, holistic approach oriented on all aspects, specific to the theme, is lacking. In particular, the government, employers and employees need to have  a more prominent role herein and take direction whether or not in existing platforms such as the National Dialogue platform ‘Diálogo Nashonal Kòrsou ta Avansá’.

After the presentation of the conclusions and the findings of Miguel Goede followed the presentation of Suzanne Larmonie, Policy Director at the ministry of Education, Science, Culture and Sport (ESCS), entitled ‘Future of Education and digitization in the Education’. Ms. Larmonie spoke extensively about the fitting in of the 21st Century Education Skills (critical thinking, creativity, collaboration, communication, information literacy, media literacy, technology literacy and flexibility) in the education system and the many challenges the education is confronting to incorporate these 21st century skills into the education curriculum.

Afterwards, it was the turn of the union leader, Wendell Meulen of the union UGTK/CADMU, to bring forward his union perspective on the theme. “Although the trade unions are indeed aware of the changes on the labor market, they are of the opinion that the labor rights obtained in the framework of the discussion on ‘decent work’’ cannot be taken away just like that’’, according to Meulen, who further emphasized that there is much profound discussion on this within the circle of the international union movement.

Clark Russel, entrepreneur and president of the Association of the Business Community in Curaçao (VBC) and Dennis van der Veen, intrapreneur, working at the Curaçao software company Ictual N.V., both gave the employer’s viewpoint on Future of Work, in which both pointed out the relevancy of independency and survival of employees. Both gentlemen brought forward that Curaçao is in fact a paradise to live and work on and that Curaçao needs to open its border for highly educated young knowledgeable workers who could offer their products and services through the internet from our island to the whole world. ‘’In the discussions about the migration policy, this aspect should have for sure priority’’, they believe.

Finally, Runy Calmera, economist, and Veronica de Sampayo Garrido, HR-experts, gave their opinions about Future of Work based on their specific expertise, both indicating that the process is irreversible and that it requires courage of everyone to take the correct strategic choices timely.

The conference concluded with an appeal to the community to foster social dialogue, to protect and put into practice as a counter act against the negative political and public speeches and to promote tripartitism because of the added value of this in the working world. 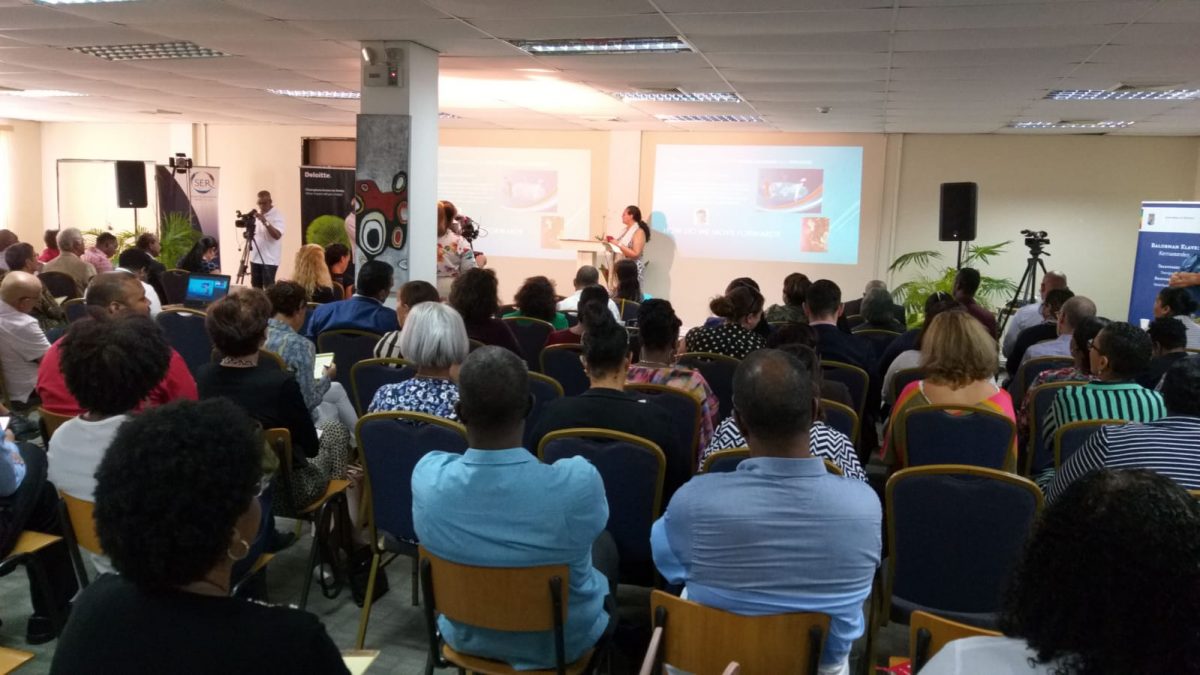 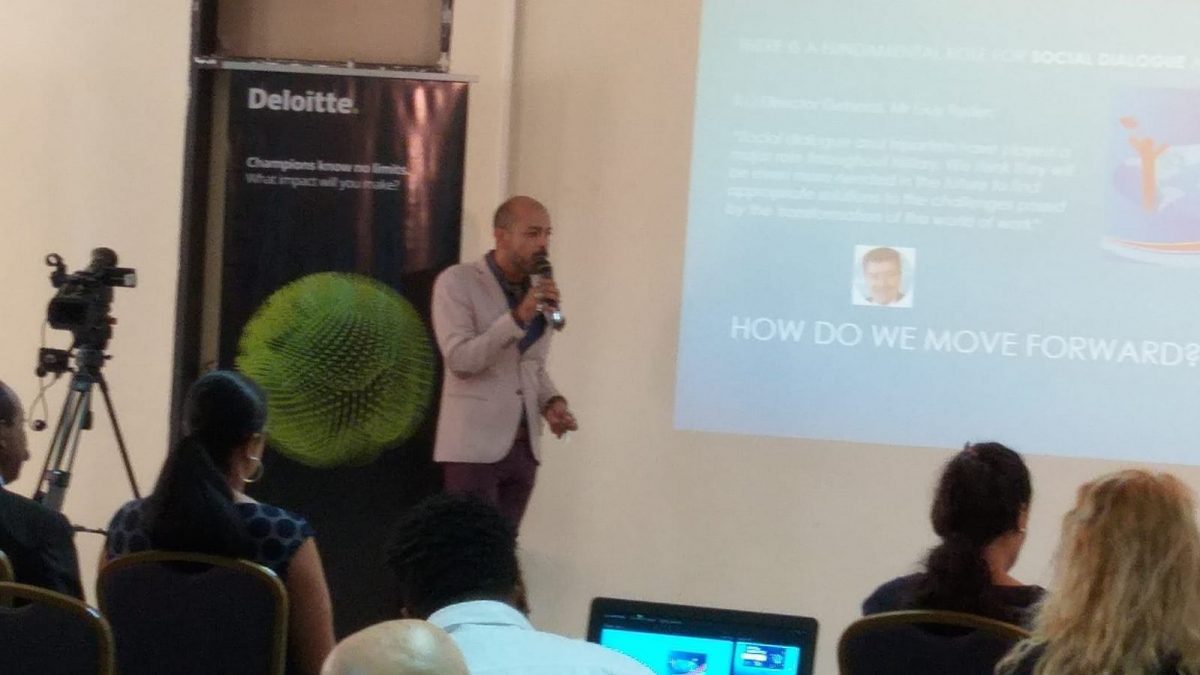 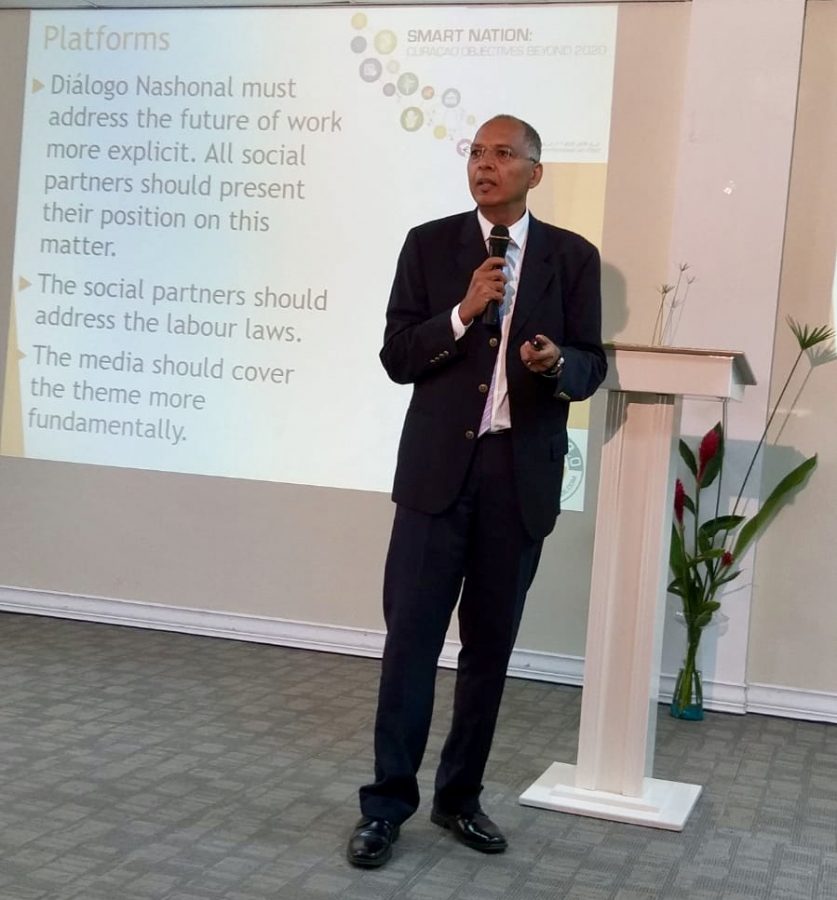