Willemstad, 20 November 2019 – The progress committee that supervises the progress of the Growth agreement, paid a second visit to the Social Economic Council (SER) on November 19th. The purpose of the visit was to get more acquainted with the Progress committee and the members of the SER, and to learn more about the viewpoints of the SER regarding the implementation of the different objectives as outlined in the Growth agreement. A previous meeting with the SER, in smaller groups, took place on 3 September.

The progress committee was set up on 1 August 2019; its tasks are to supervise the progress of the agreements and the realization of the objectives as formulated in the Growth agreement; Encouraging and boosting, supporting and advising; and reporting to the responsible governors of the countries about the progress and the implementation. The Growth agreement was signed by the governments of Curaçao and the Netherlands on 12 July 2019.
The progress committee consists of Mr. A. Romero – Chairman, Mrs. A. van der Pluijm-Vrede, member on behalf of Curaçao, Mr. P. van den Berg, member on behalf of The Netherlands. The committee is assisted by a joint body of the secretaries consisting of Mr. B. Koks, secretary on behalf of The Netherlands and Ms. A. Kleinmoedig, secretary on behalf of Curaçao. Mr. Romero couldn’t attend the consultation.
On behalf of the SER were present at the consultation Mr. C. Rojer, independent member, Mr. P. Cova and Mr. J. Zimmerman, representatives of the employee’s organization, and Mr. J. Kusters and Mr. R. Lieuw, both representatives of the employer’s organization. The remaining members couldn’t attend the consultation. From the part of the Secretarial Office SER/ROA/GOA, the Secretary General of the SER, Mr. R. Henriquez, and the advisers Ms. B. Perquin, Mrs. Curial-Villarreal, and Mrs. M. Sboui-Racamy were present.

The Growth agreement has as starting point the Growth strategy. The Growth strategy was established by the government of Curaçao in October 2018 and has three important pillars (i) stimulating structural economic growth; (ii) strengthening the financial administration (iii) and strengthening the governmental force.
Two matters were included in the Growth agreement: the social agenda and education.

Topics that were addressed during the meeting were among others the economic reforms, the measures increasing burden versus cost saving measures, the current state of affairs related to the implementation of the project Reforsá Kòrsou, the question being if the Growth agreement has taken into consideration the possible closing of the refinery which will result in an enormous increase of unemployment, the possibilities for technical support, and the advice given by the SER on sub areas in the Growth agreement. The incentives that The Netherlands will make available if the goals as set out in the Growth agreement are achieved were also discussed. These incentives in the form of loans (in a total amount of 180 million guilders) will also make the economic reforms possible.

The progress committee reports each quarter to the responsible governors of the countries. The SER has emphasized that publicity of the reports, or in any case reporting to the social partners within the business community and to the SER, is of eminent importance to accomplish social embedding.

On the picture: impression of the consultation between the SER and the Progress Committee Growth agreement. 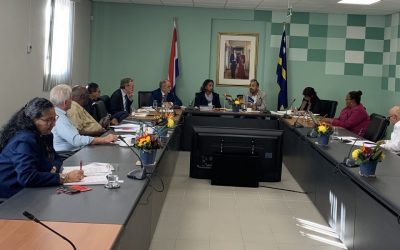