Willemstad, 31 January 2019 – As previously reported on 24th and 25th January 2019, a technical delegation of the SER Curaçao participated at the Conference Social Innovation for Refugee Inclusion in Brussels. The conference was organized by the European Economic Social Committee (EESC), the Migration Policy Institute, United States Mission to the European Union (EU) and the Mission of Canada to the EU. During the conference, many examples were given of new strategies used in Europe, the United States and Canada in which a blueprint could provide a more human, innovative and neighborhood oriented approach for social and economic inclusion of new-comer’s and local residents. The Canadian Ambassador to Germany, Mr. Stéphane Dion, began his lecture by saying ‘diversity is a fact, inclusion is a policy choice’, after which he stated that the Canadian migration- and integration policies work both socially and economically, citing the cities of Toronto and Montreal as examples. In order for the policy to be effective in the future, policies for inclusion of the third generation migrants must be developed proactively and together with the community. Also Mr. Carlos Trindade, president of the EESC Group on Immigration and Integration emphasized that immigration and integration policies must be given form by employers, trade unions and the social mid-field players to address the needs of the local communities and those of new-comer. He, hereby referred to the established initiative advice of the EESC of December 2018 about the costs of non- migration and non-integration for Europe. Without immigration the economies of the member states would receive a severe blow, pension systems would be untenable, the health and medical care could collapse, and irregular migration could increase with high costs as consequence, such as black labor market, exploitation and modern slavery, and xenophobia would have an even better breeding ground. On the other hand, migration has many benefits for the host countries, such as economic growth, innovation, closing of the pension gap and the cultural and ethnic diversity enriches the host countries, and the countries of origin benefits of remittances, which involve a larger amount than the foreign aid, according the advice.’’ In order for the potential of migration to be fully exploited, an approach needs to be taken to benefit more from migrant skills. [..] It is of utmost importance to create the necessary conditions for a successful integration of migrants.
Different speakers stated that new-comers integrate themselves, unless there are economic, institutional or political barriers, for example on the housing market, access to social provisions and the labor market. A best practice to level these barriers is among others the Swedish Multi Stakeholder Entry Hub model for the labor market integration that is based on the cooperation between the private sector, trade unions and providers of social services. During this conference a video was shown of this model with one of the employers of PostNord, the biggest mail company of Scandinavia, where in a short time 25 refugees were employed and during working hours learned the Swedish language. The successful Belgium NGO DUO for a Job connects young migrants through a mentoring program to experienced professionals and is based on the principle that social and economic inclusion are two sides of the same coin. The importance of a story about migrants is based on facts was emphasized by different speakers and during the panel discussions. “Don’t look at migrants as weak, but as people with talents who create jobs”. Mr. Tariq Tarey, Director of Refugee Social Services at Jewish Family Services, Columbia, the United States, gave as an example: a small town in Ohio where 873 companies were set up by refugees mainly from Syria, in which the employees with a migration background after a number of years earn an average income that is hardly below the average income per capita. These companies not only provide local employments, but also make a substantial contribution to local government finances, and provide innovative and economic growth. The initiatives in the field of the so-called Social Impact Bonds are promising. Under these programs private investors finance upfront social provisions for migrants, varying from accommodations up to education. When the formulated objectives are achieved, the service providers will receive a financial contribution from the government. With these and other initiatives in Europe, the United States and Canada, a landscape of smaller and larger cities and rural communities is forming that welcomes migrants, for humanitarian and economic motives, as well as to counter-act the rise in the ageing and shrinking of population and the labor force. 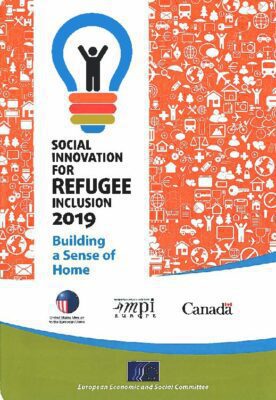