Willemstad, August 11, 2022 – The SER has issued an advice to the Minister of Social Development, Labor, and Welfare (SOAW) regarding the proposal to apply an additional reduction of 10% on benefits paid under the National Ordinance General Old Age Insurance (AOV) and the National Ordinance General Widows and Orphans Insurance (AWW) which are being paid to non-residents of Curaçao. The proposed measure is a result of the government’s long-standing efforts to secure the payment of old-age pensions and widows’ and orphans’ benefits in spite of the increasing deficits of these social funds.

In 2017, non-residents already had to deal with a 10% reduction of their AOV and AWW benefits. By then, the justification of this reduction was that non-residents contribute almost 30% less to the local economy compared to residents by not contributing to the General Fund for Special Medical Expenses (AVBZ), nor to the turnover tax (OB) or the Gross Added Value (VAT) of the country. With the proposed measure to again apply a reduction of 10%, an attempt is made to balance the AOV and AWW funds without increasing the National Contribution to the fund. 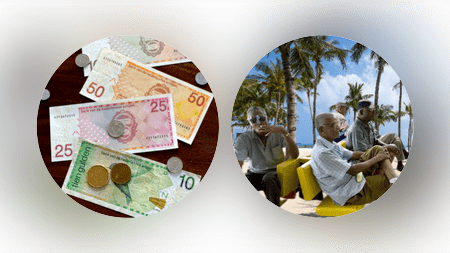